The event was hosted by the CIPD, the professional body for HR and people development, Patricia Gibson MP, Lucy Herd (The Grief Educator and mother of Jack, after whom Jack’s Law is named), and Lord Knight of Weymouth.

Jack’s Law was introduced in Great Britain in April 2020 and focuses on the right to parental bereavement leave and pay. It applies to employed parents who lose a child under the age of 18 or suffer a stillbirth (from 24 weeks of pregnancy), irrespective of how long they have been with their employer.

Parents with at least 26 weeks’ continuous service with their employer and weekly average earnings over the lower earnings limit are also entitled to Statutory Parental Bereavement Pay.

The CIPD and Lucy Herd have been campaigning to change the law to ensure that employees who experience the loss of a close family member receive bereavement leave and pay*.

Since the beginning of the pandemic, many employees will have been affected by losing a loved one and some may have been unable to take appropriate leave from work to grieve or to make suitable arrangements.

The CIPD and Ms Gibson invited MPs and Lords to the drop-in session to pledge their support to their campaign and Ms Gibson’s Bill to extend bereavement leave to employees.

Joanna Cherry QC MP said: “I fully support extending paid bereavement leave to employees and was pleased to attend this important event. When someone suffers a bereavement it can have a huge impact on their mental health and wellbeing and as such they might not be able to perform as usual at work. Access to paid bereavement leave can support an employee by giving them time away from work to grieve and assist with any practical matters as necessary.”

The CIPD’s latest research found that 75% supported an extension of Jack’s Law so that more employees experiencing a close family bereavement will be able to take leave and be paid for it.

Claire McCartney, Senior Resourcing and Inclusion Adviser at the CIPD comments: “Employees that have experienced a close family bereavement will need time to come to terms with what has happened and will be highly unlikely to be able to perform well at work if they are forced to return too quickly. While many organisations provide paid bereavement leave to support employees at one of the most difficult times of their lives, this is far from universal and extending the statutory provision is likely to give employees time and space to grieve rather than worrying about paying their bills and financial worries.”

Lucy Herd, The Grief Educator and mother of Jack said: “When I started this campaign nearly 11 years ago, I had always hoped legislation would be created for everyone to be able to take time off should they need to, in the event of a family death. Time is precious and we should not have to worry about taking time off from work because our whole world has altered due to grief. Therefore, we are working towards ensuring Jacks Law is amended, to better protect future families from being told they can’t take ‘time’.”

*(Paid parental bereavement leave is available to employees with 26 weeks’ continuous service with their employer and weekly average earnings over the lower earnings limit (earning on average at least £120 per week before tax). The CIPD recommends following the same approach to extending bereavement leave.) 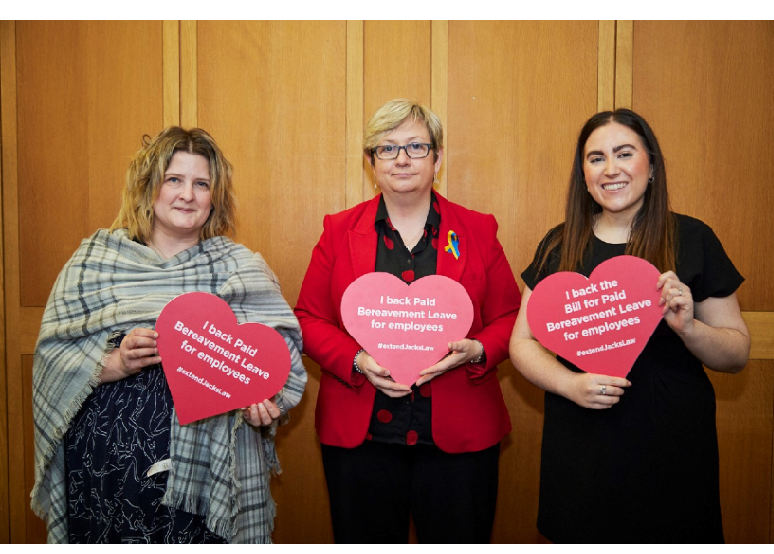