Joanna Cherry has been named as one of the 100 ‘Women In Westminster’ in House Magazine’s annual celebration of the most inspirational and influential women in Westminster.

The annual programme recognises and celebrates the outstanding achievements of women in the past year of public life, who are not only influential in their own field, but who possess the talent and platform to inspire the next generation to make a difference in Westminster and beyond.  ‘The 100’ includes parliamentarians, journalists, civil servants and activists.

Baroness Jenkin, Patron of the programme, said ‘Women still face a number of challenges, both inside and outside of Westminster … It is far too rare that we champion the achievements and contribution women have made to our democracy across all sectors and shine a light on how much of a difference they have made.’

Joanna said ‘I am proud to make this list.  Judging from my mailbox, many of my constituents and the public appreciate my standing up for the rights of women, girls, and the same sex attracted in the face of an ideology that seeks to replace the biological reality of sex with the social construct of gender. Honours like this go a long way to make up for the bullying and intimidation I have had to endure as a result. I am proud to be living proof that it is possible to survive a determined attempt at cancellation, and I thank the judges of the competition and everyone who has offered me their support.’

Joanna is deputy chair of the Joint Committee on Human Rights, and as such is instrumental in scrutinising the government’s revision of the Human Rights Act. She recently stepped in on the Nationality and Borders Bill saying it would see the UK turn its back on the people it should be helping. She is a champion of women’s rights and has spoken powerfully on their erosion. She is also a vocal campaigner against abuse and harassment received by parliamentarians. 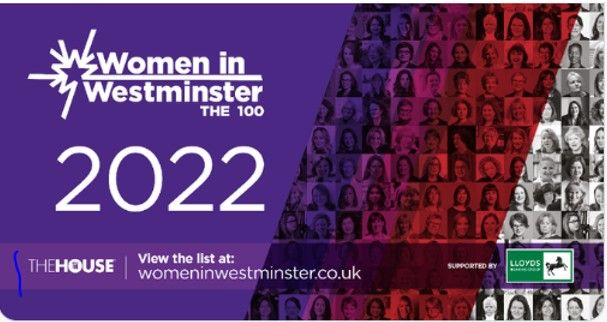